skip to main | skip to sidebar

Genius book. I wanted to review it because it’s about a part of the world—East Asia -- I only begin to see through the faces and ideas of my Korean and Japanese students at Berlitz. This is not a book about that part of Asia, however, except for a few poems about Seoul. What’s super-cool though is this book is also full of what I like about experimental work: his code lists, symbols, concrete language and wild juxtapositions of great post-modern verse.

“I like to keep perspective,” Suzanne Vega adroitly sings. So does Chiaia. (His bio says that he resides on Long Island but travels the world armed with his pens and laptop-- you can tell.) This book is an enticing travelogue of portraits of places and people from New York City to Singapore.

His wings are in the mixture of cultural references, combined with a love of Asian ambience and history, and New York’s splaying multi-cultural virtues and vices. The first part of the book, Part 1, “Ten Poems about East Asia” are dedicated to his homeland of East Asia, notably Thailand. (This is my guess, though it is not explicitly stated.) Although he writes with a conscientious and lucid notation of many catastrophes-- only one of which is a scorched Vietnam from the U.S. War against it-- there is a playfulness and richness of language that seems to come from the decadence of a narcotic-filled nights in Bangkok or Hong Kong.

“She’s up in the afternoon

nose stuffed up from too much

On the close of the Vietnam War in Phnom Penh he snaps this shot:

where the Khmer Army,

took all the guys wearing glasses,

the doctors, the teachers,

to the killing fields

to the Teng Sleng”

The Kitsch Part 2 Section is full of Odes to many things. There are several sarcastic but true enough Odes to America that hit hard and funny. Here’s one example:

in a room full of boys.”

Against this stake to the heart of America’s big boy greed and ridiculousness is a Ginsberg-esque piece called, “Ode for the Fucking Sake of it” that captures the freedom and cravings the US engenders & which suddenly darkens down with an iteration of 9/11.

the honking, smell of knishes and sauerkraut

The Latinas with hoops and jeeps

the parks and it’s craziness:

Invisible on rooftops, in vans…”

the many saying yum to the tall girl in heels

the dog run, the chess tables, the arches….”

And then a jumbo jet turns right back into the World Trade Towers and Chiaia returns us to the brutal realities under the surface, or just behind them now, where other brutalities have taken their place:

“the terrorist attacks, the steel burning, the buildings falling,

the smoke that stayed, hovered, stank

of burning flesh and steel

the following antipathy, altruism, and apathy.”

Chiaia is a unique trip-hoppy visionary of language and this book encompasses war and peace, lyricism and death, and hit or miss mixes with strangers, especially women. It’s cover is forest green swirled with an image of a battleship the color of money and spring. 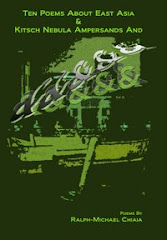